Sesame Street  is taking on the problem of hunger, not the famine in the Horn of Africa, but the increasing incidence here in America.  Foreign Policy magazine found this striking enough to tag it under “decline watch,” and suggested that this was the death knell for our time as a super power.

This problem is pretty amazing in a country which boasts the following:

So, two-thirds of our adults are overweight and yet we have a problem with hunger as well.  Let’s take a look at a few charts to see how we arrived at this juncture.

I added the graph from 1994 as it is the first year with all states reporting.  As you can see here, no state had hit the 20% obesity mark.  That would not happen until 1997.

Fast forward 16 years and every state in the union has passed the 20% obesity mark.  On top of that, a dozen over achieving states have eclipsed  30%!

If you’re tired of hearing that America is past its prime and that we’re no longer the leaders we once were, don’t despair.  American exceptionalism is alive and well!

On top of our ravenous appetites, we also waste an incredible amount of food.  One study found “that forty to fifty per cent of all food ready for harvest in the United States never gets eaten.” (http://www.foodproductiondaily.com/Supply-Chain/Half-of-US-food-goes-to-waste)  This study did not state it explicitly, but it did not appear to include the corn which was grown for the express purpose of creating ethanol.  The chart below shows that this practice is now consuming nearly 40% of our corn harvest. 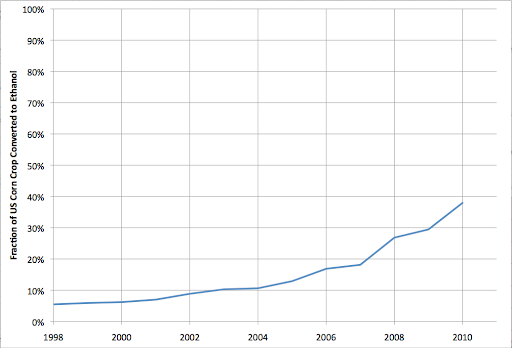 “Pink-faced Muppet Lily, whose family deals with food insecurity,” goes to bed hungry, but I think we can agree she shouldn’t have to.

One thought on “Elmo is Ashamed of Us”